Mining in Africa: Progress or regress?

Freight wagons containing mined platinum-rich ore stand on tracks in the mine shaft ready for transport to the surface during a media tour of the Sibanye-Stillwater Khuseleka platinum mine, South Africa, October 16, 2019. /Getty Images

Editor’s note: Alexander Ayertey Odonkor is an economic consultant, chartered financial analyst and a chartered economist with an in-depth understanding of the economic landscape of countries in Asia and Africa. The article reflects the author’s opinions, and not necessarily the views of CGTN.

Regarded as an essential component in the economic fabric of Africa, mining on the continent dates back to the 15th century. With more than 30 percent of the world’s mineral reserves, Africa produces more than 60 different metals. The production of these minerals has been the backbone of many African countries.

In spite of the huge revenue generated from the export of minerals, poverty is prevalent in the region as one in three Africans or 422 million people, live in extreme poverty, which represents more than 70 percent of the world’s poorest population.

Most of Africa’s poor population live in rural areas where mining and agriculture is the predominant source of employment. Over reliance on revenue from mining at the expense of rural development and agriculture has been deleterious to the region’s socio-economic and environmental landscape.

From this perspective, there is a striking difference between Resource-Rich Countries (RRC) and Non-Resource Rich Countries (NRRC) in Africa. According to the World Bank, there is high incidence of malnutrition among children and women; life expectancy is 4.5 years shorter, literacy rates are 3.1 percentage points lower, voice and accountability measures are lower and domestic violence is nine percentage points higher in RRC.

Conversely, in South Africa, the world’s wealthiest mining jurisdiction (excluding petroleum reserves), where the world’s richest mineral deposits are located with non-energy mineral deposits estimated to exceed 2.4 trillion U.S. dollars, mining plays a critical role in the socio-economic development of the country; a contrast from the penurious condition in other RRC.

Although the production of minerals add economic value to South Africa’s economy, the contribution of the mining sector to the country’s Gross Domestic Product (GDP) has declined from a fifth of the total GDP in 1970 to only eight percent in 2018.

Even though the mining sector currently accounts for just four percent of formal employment in South Africa, a detailed analysis indicates that because of the relatively high wages workers receive from the mining sector, a new job lifts 1.3 people from poverty. 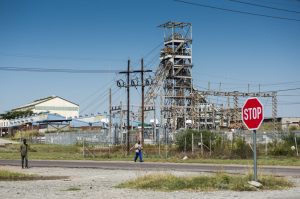 Unlike other African countries, where relevant data on mining is difficult to access, Mali has comparatively reliable data on the socio-economic impact of mining in the country.

A study conducted by the World Bank in Africa, to ascertain the socio-economic impact of mining in local communities suggests that in Mali, the use of basic social services such as electricity was extremely low in mining communities before the mining boom in 1998; less than two percent of the population in these mining communities had access to electricity or even used improved fuel for cooking.

This continuous in-ward migration into mining communities has contributed significantly to the relative low rate of poverty reduction in mining areas.

Also, in most African countries, host countries do not receive all the benefits of mining as they usually rely on foreign investors to develop the mines in the region. One of the dominant foreign investors in Africa’s mining sector is China.

Despite the mining sector’s immense contribution to African economies, development in the sector has been at the expense of the agriculture sector; which is more effective in alleviating poverty than the mining sector.

The fertility of the soil is reduced in these areas as a result of chemicals that enter the soil from mining activities. In some African countries, abandoned mining sites have turned into death traps as the lands in these areas have been heavily damaged.

Governments in Africa could draw lessons from other parts of the world to provide a sustainable panacea to the collateral impact of mining on agriculture. To achieve this feat in Africa, mining activities should be intertwined with sustainable development goals.