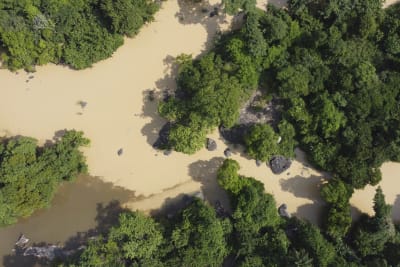 Considered sacred by Nigeria’s Yoruba people, the Osun River may be under threat. Religious leaders sent the alert claiming it is being polluted by illegal mining and large-scale companies’ activities. A dramatic and dangerous situation for thousands of worshippers who can bathe or drink its water from.

“What people refer to as water we call herb, the herb of Osun because it has transcended ordinary water. It is not a river without an origin, it has an origin and has become a herb that we use for healing”, explains Osunyemi Ifarinu Ifabode, a chief priest in Osogbo.

The river flows through the Osun-Osogbo sacred grove, a Unesco world heritage site in southwest Nigeria home to traditional festivities. The Osun state has large gold deposits which attract standard and illegal mining operations. “There was no threat to the river before now but since mining activities began, people mining gold and using all sorts of chemicals, it is the chemical pollution that flows down the Osun river reaching the sacred river at the grove, says Osunyemi Ifarinu Ifabode, We asked people to stop drinking the herb (water from the river) since it has become contaminated. Also, I have written to the government of Osun State repeatedly to help stop the miners and mining activities which the government promised to take action however, no action has been taken.”

Several tests conducted by the nonprofit organisation Urban Alert last year revealed the river to be heavily contaminated with lead, mercury, cyanide and other elements. They are blaming the authorities’ lack of action. “It seems the government is incapacitated about the problem and thereby exposing residents of the state, in fact, people living in more than twenty communities to the effect of the pollution. While some people think that the contamination of the Osun river is not resolvable, I am optimistic and I believe that it is possible, the government just need to have that political will to save the iconic river.”, says Anthony Adejuwon, Team Lead of Urban Alert.

Despite the Chief Priest and officials’ request to stop drinking the river water, many devotees were seen defying the warning a few weeks ago, at the beginning of August, for the Osun-Osogbo festival.