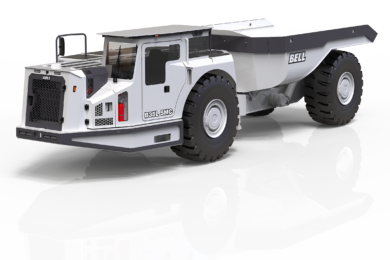 There were some interesting updates from South African-headquartered global ADT major Bell Equipment, in its 2021 year end results. It says its two new low proﬁle ADT models for underground mining – launched at the end of 2021, are penetrating this market segment well.

Both models feature an ‘autonomous ready’ platform that is easily conﬁgurable for remote operation. Given this success, the group expects to play a larger role in underground mining going forward. Machines have been deployed in Zambia and Tanzania, among other countries, where, similarly, they are performing well.

The Bell underground ADTs are available worldwide. In South Africa, Bell also has a distribution agreement with Aard Mining Equipment which is selling the two truck models under its own branding.

On autonomous surface ADTs, following its collaboration with indurad and Voestalpine dating back to early 2020, Bell Equipment says it has also been working with US safety and automation technology developer, Pronto AI, which ofﬁcially launched its product at MINExpo 2021 in Las Vegas in September. There will be a planned focus on autonomous ADT awareness in the US for 2022. Pronto says “it brings that same industry-leading technological innovation to products with real value to real customers, right now.”

Pronto AI’s A2B system can be installed on virtually any OEM brand and type of truck, whether rigid, ADT or even a class 8 semi. It is ‘plug and play’ with existing and mixed fleets so there is no new equipment to buy or complex additional maintenance. It says its business model is built on close cooperation with customers, from several of the world’s largest natural resources companies and aggregates producers to small, independent operations. “We focus on seamless integration, ease of use, and a practical, iterative approach to technology adoption that creates real value from day 1. This new model for advanced technology deployment is cost-effective and pragmatic, making A2B the safest and best value autonomous haulage system, period.”

Bell states: “The group is excited by these developments as autonomous vehicle operation is aligned with the Fourth Industrial Revolution’s objective of achieving higher levels of automation for greater process and energy efﬁciencies and cost reduction. We believe it will also deliver safer vehicle behaviour by reducing the instances of human error and negate the impact of whole-body vibration on operators in the workplace.”

Other progress areas include the introduction of a global preowned equipment website that is performing above expectation. It enables customers from around the world to shop all the preowned equipment available from Bell and its participating dealers from one user friendly and convenient website. In addition the implementation of a user-friendly SalesForce CRM for the Bell-owned South African dealership digitised a manual, paper based sales process to provide greater visibility, analysis and management of customer interaction. Further investment in the deployment of CRM to other Bell owned dealer operations is planned for 2022. Otherdevelopment using the Microsoft platform enabled the digitisation of several manual processes in the group, which has contributed to increased efﬁciency and visibility of internal processes. This development will continue in 2022.

Finally, more of Bell’s ADTs manufacturing is set to shift to its Eisenach-Kindel facility in Germany, which most recently completed an expansion in 2019. Bell stated: “The group remains committed to South Africa as a local manufacturer and is conﬁdent of the opportunities available to us, but it is vital to our business that our customers around the world trust in our ability to effectively support them and being closer to our major markets is important to achieve this. This will create capacity at the group’s South African manufacturing facility to increasingly focus on manufacturing the group’s growing range of lower volume products.”

The group has invested in the Rise with SAP platform and will migrate its existing instances of SAP for the hubs of the Global Logistics Centre (GLC) in Johannesburg, European Logistics Centre (ELC), American Logistics Centre (ALC) and Eisenach-Kindel factory onto this solution during 2022. The incorporation of the ALC on the Bell SAP platform forms the foundation for online parts functionality and allows for streamlining of processing between the hubs as well as greater visibility into groupwide inventory.