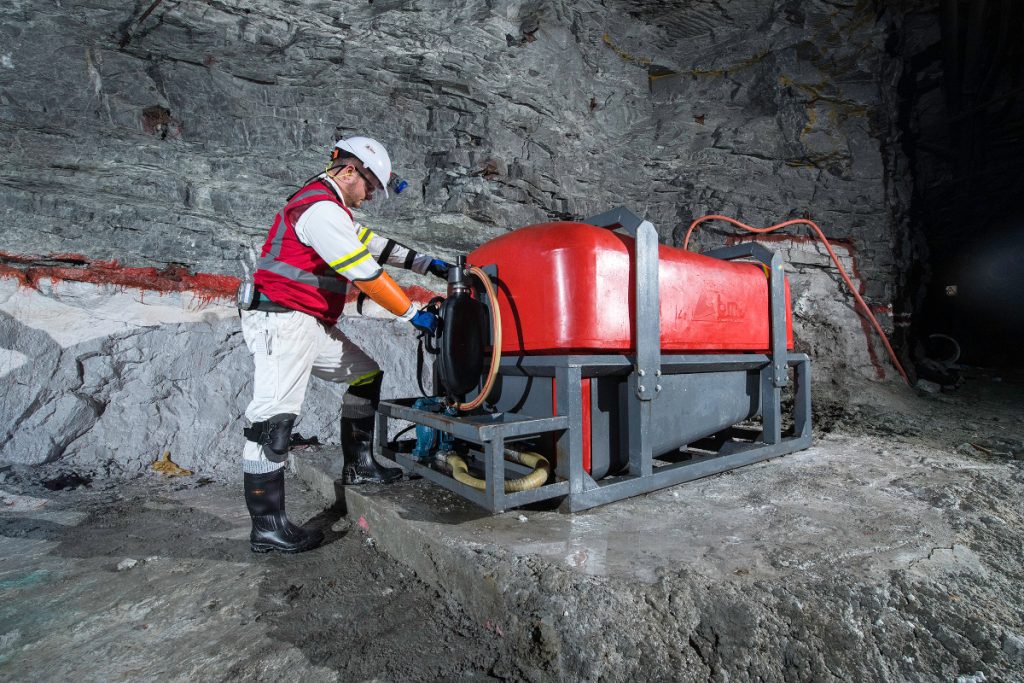 Years of innovation and experience in the underground space have now positioned BME – part of the JSE-listed Omnia Group – as an important player in mines where low-profile, bord-and-pillar mining methods are employed.

As a blasting and explosives leader in the opencast mining sector for decades, BME

has steadily moved into underground mining with a range of innovations based on its tried-and-tested products, services, and technologies. According to Neil Alberts, International Underground Business Manager for BME, the company has seen its participation grow in a number of commodity segments including platinum.

“The low-profile platinum operations are particularly well-suited for the application of our emulsion pump technology,” said Alberts. “Our versatile emulsion charging units can be custom-built to fit carriers – from low-profile or high-profile – from any of the suppliers or manufacturers in South Africa.”

He highlighted that emulsion pumping technology for underground operations has been an important focus for the company, as the safety, reliability and cost-effectiveness of emulsion explosives represent the future of South African mining. What makes the BME mobile pump system so unique, he said, is its ease of use – with its compact design taking up less than half the space of other pumping configurations in the market.

“This is the result of our prolonged investment in research and development, to design and commercialise versatile solutions that can be applied across all underground mining methodologies,” he said. “The three-in-one design with its double-pumping system gives the BME pump its own emulsion chamber, sensitizer chamber and water chamber – reducing costs and raising reliability. Competitor systems tend to require three to four separate pumps to deliver the same duty.”

These advances mean that charging times can be reduced by 30% or more, raising the number of faces that can be charged for blasting within a single shift – an important driver of overall mining efficiency.

“Low emulsion density can help to reduce over-break and optimise hanging wall and side wall strata control, while the pre-set high-density function allows for maximum face advance,” he said. “Previously, mines would have to apply different types of explosives to achieve this level of strata control, but now the BME pump technology provides the same functionality on one emulsion charging unit.”

State-of-the-art control and reporting systems on the BME emulsion charger are customisable to specific mine requirements and give users immediate control over crucial variables like powder factor. This is vital when operational adjustments need to be made in response to inevitable changes in mining conditions over time.

Augmenting BME’s offerings is its BLASTMAP Underground software for tunnelling operations and shaft designs, allowing the blaster to interact with 2D and 3D views of complex designs to manage burden size, drilling angle, dimensional compliance, and other factors.

The company’s AXXIS™ Centralised Blasting System (CBS), designed to allow simultaneous underground blasts to be initiated from surface, is based on its well-proven AXXIS GII detonator. Including a centralised control box on surface and centralised blasting boxes underground, the system can accommodate up to 100 detonators per blasting box. The AXXIS CBS can even be used to initiate non-electric detonators where mines are still using shock-tube technology.

“The user interface records a wide range of valuable information on each blast, storing data in a ‘single source of truth’ format for accurate and safe retrieval,” said Alberts. “It monitors constantly whether the system is in stand-by or blasting mode and tracks key indicators of the system’s health – immediately reporting any detected fault.”

He emphasised that – as mines increasingly integrate their systems for real-time digital monitoring –BME’s technology gives management the capability to log into blast planning activity at any time from a computer, tablet, or smartphone. In addition to the safety and efficiency of BME’s blasting systems, management is therefore also equipped with the information it needs for quicker and better decision-making.