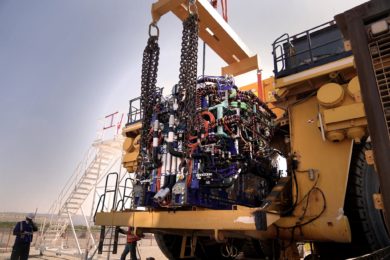 The launch of Anglo American’s hydrogen-powered ultra-class mine haul truck – newly named nuGen™ – has been set for May 6, 2022 at Anglo Platinum’s Mogalakwena open pit platinum operation in Limpopo Province, South Africa. The final achievement of first public movement of the truck, a converted 291 t class Komatsu 930E, will be a huge moment for Anglo’s low carbon transition and Scope 1 and 2 emissions reduction plans as it works towards its stated interim target of 30% reduction in GHG emissions by 2030, including eight sites carbon neutral by that date.

The truck is strictly speaking not purely powered by hydrogen – it is an FCEV truck – including both hydrogen fuel cell and lithium battery technology. Anglo American says that nuGen™ is an example of its FutureSmart Mining™ in action – “demonstrating how Anglo American is applying innovative thinking and technological advances to address major sustainability challenges – for Anglo American, their people and the world more broadly.”

A lot is riding on nuGen™ – Anglo American’s Tony O’Neill, Technical Director, has stated that while the total-cost-to-operate will be comparable to diesel the system will achieve direct parity by 2030 adding that the FCEV trucks will allow for 50- 70% reduction in emissions (Scope 1 and 2 for open-pit mines). Anglo said in 2019 that it has seven sites in planning for rollout completion by 2030, including the Los Bronces and El Soldado copper mines in Chile. At Mogalakwena, a full 40 truck rollout was planned to start in 2024. Hydrogen-powered trucks are also on the cards for its Kumba Iron Ore operations in South Africa, which include both the Sishen and Kolomela mines.

The nuGen™ Zero Emission Haulage Solution brought together some impressive global technologies – the 2 MW powertrain consisting of Canada-made Ballard Power Systems fuel cells (eight FCveloCity®-HD 100 kW modules) and a Williams Advanced Engineering (WAE) battery power module built in Grove, Oxfordshire, UK which were brought together with the electronics system by the main integrator and Anglo technology partner First Mode, in Seattle USA. The on-truck hydrogen fuel tank was developed by Netherlands-headquartered NPROXX while off-truck technology and infrastructure includes a 3.5 MW electrolyser plant from Norwegian company Nel for hydrogen production and Plug Power refuelling system. Anglo itself is also a significant investor in both Ballard and First Mode. WAE was recently acquired by another mining giant – Fortescue Metals Group – to work with its Fortescue Future Industries (FFI) division, which has built and already begun testing its own FCEV truck, based on a converted 221 t Terex Unit Rig MT4400, in Perth, Australia.

But nuGen™ remains a world-first innovation with its size and scale – designed to operate fully laden with a payload of 291 t in real mine conditions. The launch, both locally attended as well as virtual, will include a working demonstration of the nuGen™ truck and a guided tour of the on-site hydrogen production, storage and refuelling complex – which incorporates the mentioned Nel electrolyser that is the largest in Africa. It will generate hydrogen from electrolysis on site, using renewable power sources ( a 100 MW solar photovoltaic plant from a Pele Green Energy – EDF Renewables South Africa consortium) to power the truck. Anglo American and Engie worked together to develop the hydrogen complex which has a capacity to produce up to 1 t per day. Producing hydrogen to fuel the truck on site will eliminate the reliance on importing fuels and generate further cost savings.