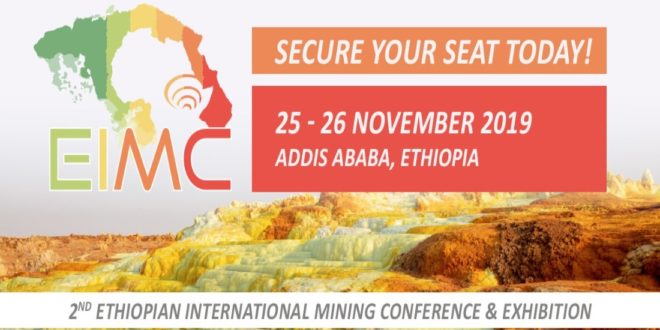 The Ethiopian government has set a target for its mining sector to contribute around 10 per cent of the country’s Gross Domestic Product (GDP) by 2025.

The sector contributed less than 1 per cent of Ethiopia’s GDP, 14 per cent of exports, 1 per cent of government revenue and was only able to create 4,000 formal jobs in 2018.

Ethiopia is set to host the second edition of the Ethiopian International Mining Conference & Exhibition (EIMC 2019) and the country hopes the conference transforms its mining sector.

It will take place from 25 – 26 November 2019, in Addis Ababa under the theme, “Transforming potential into production by creating an attractive mining investment framework”.

According to a press release, EIMC 2019 will be an all-encompassing two-day mining event including a mining industry conference, trade exhibition, as well as numerous networking opportunities.

“Ethiopia is rich in mineral resources, including oil and gas, these remained largely untapped, adding mining’s potential to contribute to economic growth and poverty reduction in the country could not be over-emphasized. The sector contributed to less than 1 per cent of GDP, 14 per cent of exports, 1 per cent of government revenue and was only able to create 4,000 formal jobs in 2018,” reads the press release.

Ethiopia believes the mining sector is a key pillar of Ethiopia’s Growth and Transformation Plan (GTPII) which aims to make Ethiopia a middle-income country by 2025.

It will be done by transitioning from an agriculturally based economy to an industrial one, this is according to the press statement.

According to reports in 2017 Ethiopia was the fastest growing economy in the world and its growth has reached over 9% during the last decade as well as a 167% increase in Foreign Direct Investment over the last 5 years, totalling US$ 3.5 billion.

Although commercial mining is still in its infancy with just over 50 companies being in active exploration and 58 companies in the development phase of production, investment in the sector is expected to boom.

In 2017, Ethiopia exported 2,290 kgs of emeralds; their quality is high and like those found in Colombia.

Sapphires were found in November 2016 in the Tigray Regional State and there has been limited geological work carried out in this area, therefore offering many possibilities for investors.

The statement says Ethiopia could challenge the Australian opal which has been dominant on the global market for over a century.