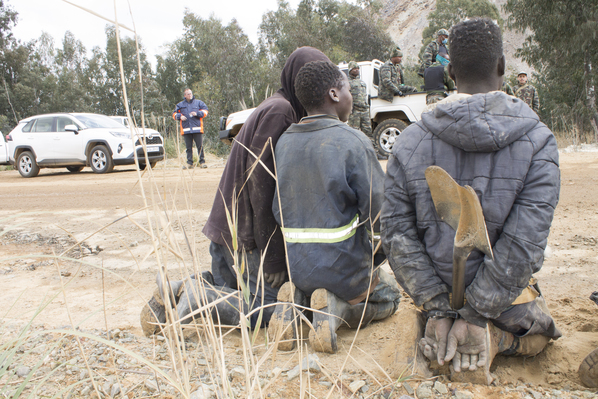 The South African Police Service (SAPS) has deployed specialised units to the West Rand to flush out illegal miners said to be terrorising communities in the area.

Welcoming the development, the Police Ministry on Sunday expressed confidence in police’s capabilities to deal with the matter.

Police Minister Bheki Cele at the weekend held a two-day Crime Combating Imbizo in the region as part of ongoing police efforts to combat illicit mining and associated crimes. Engagements were held in the West Village, Krugersdorp and Kagiso.

In a statement, the Ministry said the SAPS would step up police operations, deploy necessary resources and specialised units of the service, to keep residents living in the epicentre of illegal mining safe.

The community meetings were also attended by Premier of Gauteng David Makhura and members of his Executive Council, officials from the Department of Home Affairs as well as the Department of Mineral Resources and Energy.

During the meeting, residents of both communities expressed their concerns at the violent crimes allegedly committed by illegal miners who residents refer to as “blanket people” or the so-called ZamaZamas.

Residents also claimed that the majority of gender-based violence (GBV) crimes in the area were committed by the illegal miners who were often heavily armed, and many of them undocumented foreign nationals.

The Izimbizo resulted in numerous complaints of police corruption and the local police who were not responding adequately to their policing needs.

The Minister in the meeting ordered a full SAPS clean-up in the West Rand as an immediate policing intervention.

“No community must be prisoners of crime and ruthless criminals who act without impunity. Residents have the right to feel safe and to sleep at night. This is why the SAPS must be seen and must be felt while the sealing of mines is expedited by those responsible,” he said.

He said: “We will respond through action as the police. We will deploy the highly trained TRT, NIU and Special Task Force and K9 teams to make sure we flush out all undesirable elements in this area. Whoever comes with fire will be met with fire. We ask for space to conduct these operations and request the community to assist us, work closely with us and ensure we bring perpetrators to book through court processes.”

Cele said the allegations of police corruption and inadequate service delivery at stations would be probed at a provincial level and acted on. The Minister also acknowledged the community’s call for the South African Defence Force (SANDF) to be deployed.

“The request to bring in the army will be considered when the need arises. This process takes a long time, however, in the meantime, the police’s response to flush out these ZamaZama’s will continue and will be bolstered by reinforcement of these specialised units, who will be deployed here while government works on a broader plan to tackle the whole value chain of illicit mining and its benefactors,” he said.

The SAPS has since established a multi-disciplinary Economic Infrastructure Task Team, made up of different specialised units partnering with private security, government departments, as well as business.

The collaboration aims to prevent and combat economic and critical infrastructure related crimes, including illicit mining across all nine provinces within identified districts per province.

These Task Teams are expected to hit the ground running, with intelligence gathering and analysis remaining as one of the key operational approaches.

The Ministry has appealed to residents to work with the police and bring forward information that can assist police inventions and operations.