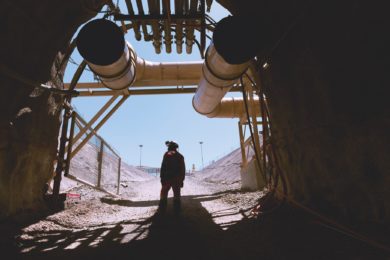 The Venetia Underground Project (VUP) is at the heart of diamond major De Beers’ future mining strategy in South Africa – it will extend production at Venetia to at least 2046, and will allow the company to fully access both the K01 and K02 kimberlites at depth. VUP is set to deliver between 4.5 and 5.5 million carats of diamonds per year. The new underground mine is set to start up in 2023, and a detailed update on progress was recently given in the De Beers Venetia Voicenewsletter for H1 2022 – including an outline of progress towards implementing its autonomous loading fleet and the latest news on the production shaft.

Starting with automation, this is is key to the success of the Venetia Underground Mine and De Beers is working closely with Sandvik Mining & Rock Solutions which is supplying a range of machines including 17 t LH517i and 21 t LH621i LHDs, 51 t TH551i underground trucks, DD422i face drills, DS412i roof bolters and DS422i cable bolters. K02 is more uniform in nature and will produce some 4 Mt/y while for K01 has more intrusions and therefore more waste; it will produce about 1.9 Mt/y. The mining method will be a specially modified version of sub-level caving. The mine will use two 1,070 m shafts – production and service, each concrete lined and 7 m in diameter.  A twin decline has also been successfully developed and has been utilised to tram waste material from the underground workings to the back fill of the K2 open pit.

De Beers says the automation of mobile equipment at VUP will focus on the core mining processes of Drilling, Rock Reinforcement, Loading and Hauling. “Automation will be introduced in an incremental manner as the operation builds-up to full production starting with automated machines, then progressing to autonomous machines and ultimately autonomous mining systems. Integrated work planning and scheduling processes will support these core processes while Digital and Analytics will create the platform to build sustainable solution going forward.”

During the first half of 2022 the focus has been on Asset Health Monitoring of the Sandvik TMM (Trackless Mobile Machinery) fleet being used by the Integrated Owners’ Team. The fleet has also been equipped with OptiMine® Location Tracking that provides accurate real-time location data. The data is collected locally by the location tracking unit on the machine, with no need for any additional production area infrastructure. Once the data has been transferred from the machine via the Wireless Local Area Network (WLAN) it and can be displayed in the control room on 2D and 3D models of the mine to keep track of the status and location of the TMM in real-time.

The company adds: “The value of the georeferenced data that has been collected from the machine, can be further enhanced by creating heatmaps. The data from a parameter or signal that is being displayed as a two-dimensional matrix or grid heatmap, using colour to indicate the magnitude of the values, can be overlayed on the layout of the underground mine to create a spatial heatmap that displays the magnitude of the data in relation to where the machine was operating when it has been recorded. The benefit of Asset Health Monitoring is that the condition of the machines is being closely monitored to prevent breakdowns while the machine is being operated and it enables maintenance personnel to improve the reliability of the units. Location data can be used for statistical analysis and determine the correlation between data points collected in the same geographical area.”

Of course the most significant benefit of automation is linked to the safety and health of employees since machine operators can be removed from a potentially hazardous operating environment and allowed to operate machines from the comfort and safety offered by the Integrated Operations Centre on surface. But specifically underground cave mining is at times associated with the risk of mud rushes and water ingress in drawpoints. “The capability to load wet material from the drawpoints without putting the loader operator at risk is a critical requirement for production start-up.”

Automated Production Loading (APL) will enable this requirement with the Sandvik AutoMine Lite system. The operator of the loader will be located safely in the area indicated as ‘Manual’ behind the ‘Access Gate’ and will tele-remotely fill the bucket of the loader at the ‘Drawpoint’ in the ‘Automated’ area by using the operator chair. The loader will then tram autonomously to the ‘Tip’ under the control of the guidance system. Upon arrival at the ‘Tip’ it will be automatically brought to a standstill by the system and wait for the operator to take control and empty the bucket before handing it back to the system for the next cycle.

In the project update, De Beers says that a pilot project has been initiated to prepare the production team for the use of the remote loading capability at the drawpoint and autonomous tramming to the tip. An area at 44 Level 125 Fresh Air Way has been identified as the testing site for the AutoMine system. This area is isolated from the daily activities that that are taking place within the IOT section. “The purpose of the pilot is to evaluate the various elements of the system in an operational environment and to identify shortcomings that need to be rectified before the full automation capability is required during the production stage. It will also allow personnel to become familiar with the operation of the system and on following the required safety procedures. The successful implementation of the AutoMine system will ensure that Venetia Underground will be able to handle wet material in the drawpoints without putting the safety of loader operators in jeopardy.”

Aside from the automation roadmap, the VUP recently took ownership of 1 of 3 Rhino 100 raise boring machines in Africa. The Rhino 100 is designed for drilling slot raises in stopes providing void space for blasting. The machines are manufactured by TRB-Raise Borers in Finland but are equipped with Sandvik tools and are distributed by Sandvik. It is forecast that the Rhino rig will offer a much more productive solution with a reduced number of steps in the process compared to that of conventional blindhole boring. This unit will reduce the turnaround time for slot raising and in doing so, improve the efficiency of slot cutting. Slot cutting by means of raise drilling still remains the most suitable method to provide relief holes within the slot cutting activity. The relief holes provide void space for blasting, thereby allow “expansion” of the blasted rock and to improve fragmentation and obtain adequate slot height.

Moving on to the production shaft at VUP, De Beers says this is one of the significant and critical infrastructures that management has monitored and managed closely. “It is seen as a key and strategic point for unlocking value to the Bottom of Mine (BoM) and VUP in totality. Upon completion, it will be equipped with four skips, each with a hoisting capacity of 24 t. These skips will hoist blasted ground from 100 level underground to surface.”

Currently, the two eastern compartments of The Production Shaft have been equipped with a temporal conveyance system to transport men and material from BoM. Once commissioned, the Service Shaft will permanently take over the responsibility for people and material transportation. “The Shaft equipping process has been an enormous task that has demanded some real effort and competency from the team. The team has so far demonstrated their commitment and tenacity to see the objectives of the project. The equipping process included installation of infrastructure and steel work that preceded the Production Shaft sinking completion. This work began on the 20th of November 2019, starting from the shaft bottom at 107 level, working up to shaft bank and all the way up to the headgear of the Production Shaft.”

The Murray and Roberts Cementation team responsible for this progress, safely installed a total of 1,020 t of steel at the production shaft and this consists of 270 t of loading box structure, 165 bunton sets, 8.8 km of shaft guides, 270 t of additional headgear steel, 9.4 km of head ropes, 8 km of tail ropes and 25 km of cabling. Upon completion of The Shaft equipping, the sinking winder and sinking hoist rope installation was decommissioned. The “Rope Up” process which followed, constituted of installation of the permanent hoist ropes and commissioning of the production hoisting winder. The rope up process was finally completed and allowed for the application of a permanent winding permit from the Department of Minerals and Energy (DMRE), thus licensing the winder to be used to hoist men and material.

ABB is supplying one double drum hoist for personnel and material conveyance, two friction hoists for production, and one single drum hoist for service duty. ABB is providing the design, supply, manufacture, installation and commissioning of all four hoists, including hoist mechanicals, motors, and electrical drive and control, all certified to the highest safety integrity levels (SIL).

A significant project milestone was achieved on June 26 2022 when the MD 1 permit, which allows for conveyance of men and material via the production shaft, was issued. Offloading the responsibility of people and material transportation to the Production Shaft will result in an increased hoisting capacity of blasted material by Service Shaft and thus allow it to facilitating the ramp up of development metres in the BoM. “The BoM development is required to double the current output from 150 m to 300 m in 2022 financial year to ensure infrastructure readiness for production ramp-up. This profile is an imperative that must be achieved to sustain the targeted production volumes in line with the business objectives.”

Ventilation fans 1 and 2 were commissioned at the end of May 2022 and have been operating successfully while upgrade work was completed substation 23 which feeds ventilation fans 3 and 4. With 4 ventilation fans available there is redundancy in the system in case one of the fans has a maintenance failure.