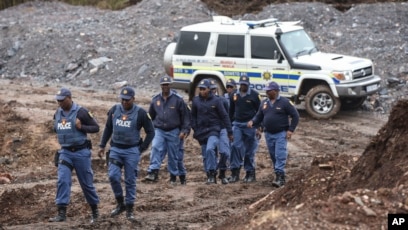 Johannesburg — South African police say the bodies of at least 21 suspected illegal miners were found outside an active mine this week in the town of Krugersdorp, west of Johannesburg. Police said murder is not suspected, but the bodies do appear to have been moved. Security analysts say the deaths are indicative of the prevalence of illicit mining activity in the country.

The discovery of the bodies has shocked the country and it is far from the first such incident.

The town also saw eight women gang-raped at gunpoint in July, and police at the time arrested dozens of illegal miners among the suspects.

“These guys are not random,” said Willem Els,a senior training coordinator with the Institute for Security Studies in Pretoria. They are part of massive well-organized organized crime syndicates that have operating transnational. So, we need the intelligence to guide us in order to develop good strategies. And then we need well-trained police officers that are well equipped in order to challenge this unique challenge that we have in the mining industry.”

Els said the country’s intelligence and policing operations are failing and are even infiltrated by organized crime syndicates.

“Law enforcement in South Africa is not what it’s supposed to be,” he said.”They’re not on the level that they can really prevent this. We also have a challenge with porous borders in the region, where for instance, in countries like Zimbabwe, their deposits of gold are dwindling, the mines are closing, and those people are without work. And then it’s a welcome opportunity for them to cross the border into South Africa, most of the time illegally.”

Witness Maluleke, professor of criminology at the University of Limpopo, said the activity wouldn’t be possible without South African involvement.

“The South African youth are part of it. And South African organized criminal networks are part of it, he said. “So, there’s not much to say that it is only illegal immigrants that are contributing largely to this crime or this practice. It is misleading.”

“People are not working,” he said. “So, they take these enterprises and opportunity to get money and to commit various crimes that are happening on our mines.”

The illicit activity is costing South Africa and the mining industry millions.

There are more than 6,000 derelict mines in the country, some of which have been abandoned for decades.

“Mining houses must take responsibility in policing themselves, in taking ethical and moral accountability, plan more effectively, and so forth,” said Jean Steyn, a criminal justice professor at the University of Zululand. “Mining houses must preventively act towards reducing illegal artisanal mining and use, for example, those that don’t have work to rehabilitate the mines.”

The mine shaft near where the bodies were found had been flooded by recent rains, but police say autopsies will be conducted to determine cause of death.

Read the original article on VOA.