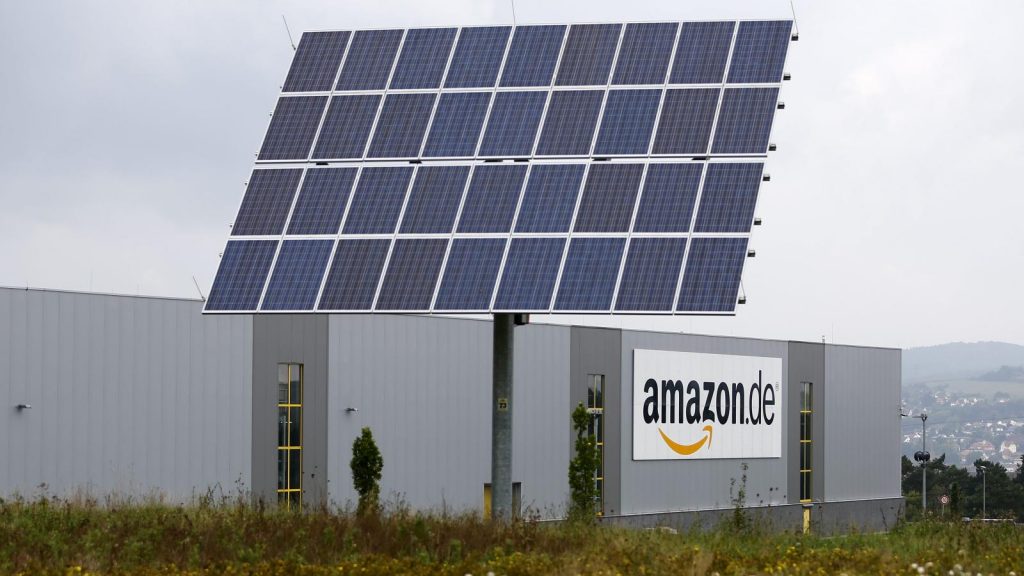 Photovoltaic solar panels in front of the Amazon distribution centre in Bad Hersfeld in Germany.

Amazon is planning to generate its own electricity to run through the grid of South Africa’s struggling state-owned power utility Eskom.

The US tech giant wants to power its new data centres including the ‘region’ data centre one for storage and processing opened in Cape Town by its cloud computing subsidiary, Amazon Web Services in Cape Town. Data centres are heavy energy users with banks of computing power running round-the-clock and often requiring cooling equipment to avoid overheating. It’s estimated data canters currently use up to 1% of the world’s electricity.

Reports suggest the power Amazon intends to generate in South Africa will come from a solar project in the Northern Cape, due to start construction in 2021 and Eskom’s grid will transmit it to its final destination.

Amazon estimates 28 gigawatts hours (GWh) of solar energy, enough to supply more than 3,000 middle-class households with electricity, will be transmitted from the project through the grid. This will be shift for Eskom which typically generates the majority of its power from coal, but has been making moves toward renewable energy.

The project has become the first to be approved by South Africa’s energy regulator a as part of efforts to improve power generation in the country.

The move to add 26 utility-scale wind and solar energy projects including its first ever in South Africa is part of Amazon’s wider ambition to convert most of its business to renewable energy around the world.

“With a total of 127 solar and wind projects, Amazon is now the biggest corporate buyer of renewable energy ever,” says Amazon founder Jeff Bezos in a statement. “We are on a path to running 100% of our business on renewable energy by 2025, five years ahead of our original target of 2030.”

South Africans have been experiencing power cuts, or “load shedding” as it is known locally, for the past few months. Eskom has been generally struggling to maintain its grid for a few years now. On Friday (Dec. 11) it announced it will implement a two-day load shedding from 6 am to 11 pm “as the system is severely constrained.”