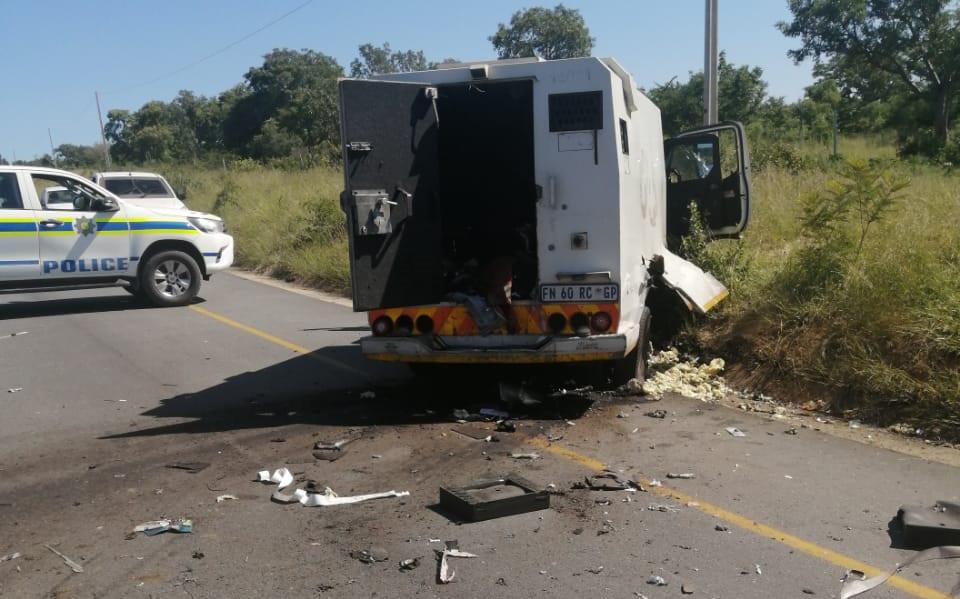 Originating in the region’s mining and construction industries, explosives are used for illegal mining and robberies.

On the morning of 3 June 2020 in Krugersdorp, just west of central Johannesburg, a grey Mercedes-Benz veered into the path of a cash-in-transit van. After the van skidded to a halt, an explosion sent pieces of the vehicle and hundreds of bank notes into the air. In the ensuing chaos, the robbers made their getaway while passers-by scrambled for the notes left behind.

Soon after, police condemned the incident and reminded civilians that it is a crime to pick up money after a cash-in-transit heist. More importantly, the public appeared oblivious to the deadly risks of what had transpired. The blast was controlled but poorly executed, with too many explosives used. These kinds of devices were undoubtedly obtained illegally through either smuggling or theft.

The smuggling of explosives has become a growing problem in South Africa and the Southern African region. Originating from the mining and construction industries in the region, explosives find their way across the South African border. They are used by illegal miners and organised criminals in attacks on armoured vehicles transporting large amounts of cash as well as bombings of ATMs.

Reports have identified large amounts of smuggled explosives originating from Zimbabwe and intercepted by authorities at the Beit Bridge border. These explosives – sourced on the country’s black market – are often used commercially in Zimbabwe’s mines. They are procured by organised crime networks who smuggle them into South Africa. Explosives have also been stolen from mines in South Africa for criminal endeavours.

On paper these acts and regulations are commendable, but the problem lies with their effective implementation. The cooperation and collaboration that is pivotal in the partnership among the three responsible departments is often lacking in practice.

For example, different government officials are responsible for the safety of the explosives at various stages. At the point of manufacture, the labour department must ensure the Occupational Health and Safety Act is adhered to in the factory. Once the explosives leave the factory, their transportation, storage and use above ground becomes the job of the police. When explosives are taken underground into mines, the Department of Mineral Resources and the mine owners assume responsibility.

This division of tasks, laws and obligations can create confusion, especially if there is a lack of cooperation among the different actors involved. One way to remedy this is to form a task force comprising members of the three departments. An action plan could then be developed outlining the roles and responsibilities of each.

There is also a need for more collaboration among the various government officials tasked with border control, such as customs and police. Corruption in border management must be rooted out and awareness raised among law enforcement officials around the threat that explosives present to national security.

Another problem, a senior law enforcement official told the ENACT organised crime project, is the lack of harmonisation of explosives’ legislation and regulations in the Southern African Development Community (SADC) region. This creates an administrative burden for the manufacture and transport of explosives between source, transit and destination countries.

Although SADC has a protocol on the Control of Firearms, Ammunition and Other Related Materials, it says little about the production, storage, transport and use of explosives. A regional protocol or strategy, such as the European Union Directive 2014/28/EU, would help mitigate the threat of explosives smuggling in the region.

A regional strategy or protocol would enable a single SADC market to be created for the legal trade in commercial explosives, so that safety requirements are consistent across countries. It would also streamline administration by establishing a single system to supervise the transfer of explosives and ammunition across the region.

Such a strategy would promote cooperation in the Southern African region among the various agencies responsible, especially for transporting explosives. Police, relevant government departments, and the mining and banking sectors in SADC would need to be involved.

While a strategy on the control of explosives won’t eradicate regional smuggling, it should deter organised crime networks. Better public and private sector collaboration would reduce opportunities for criminals to access explosives for use in robberies and illegal mining. It will also lessen the chances that innocent bystanders are injured.

This article was first published by the ENACT project. ENACT is funded by the European Union (EU). The contents of this article are the sole responsibility of the author and can under no circumstances be regarded as reflecting the position of the EU.